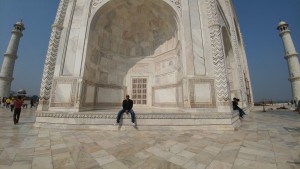 Every love story can be traced back to a first fateful meeting, that moment when new love is discovered. This is the story of how I came to fall in love with the Taj Mahal.

In 1997, the musician Yanni famously performed a concert with his 45-piece orchestra at the Taj Mahal. Shortly after, the concert aired on PBS. Now, I didn’t know a thing about Yanni at the time, but when I channel surfed across the program one night, I kept watching. Sure, the concert was great, but that wasn’t the reason I stayed. I kept watching for the real star of the show: one of the seven wonders of the world—the Taj Mahal.

It was truly love at first sight. I watched the whole concert, devouring each glimpse of the magnificent structure: the enormity, the geometric perfection, the chameleon-like quality of the white marble that mimics the colors of its surroundings. My mind was filled with questions. What the heck was it? Who would build such a thing and why? Most importantly, why did I feel this way about…a building? I’ve seen many beautiful buildings before, and I appreciate art and architecture, but I’ve never before felt this way about anything that didn’t live and breathe. I needed more information. I had to learn more about this structure that captured my heart and my mind. I took to the internet and gathered as much information as I could. I looked at as many images as I could find, hoping that I could learn enough and see enough to satisfy my burning desire to see it in person. It’s in India, after all, and how in the heck am I going to get there? Unfortunately, nothing worked. The images I saw just made me want to be in its presence all the more, so I resolved to make that happen. Some how, some way, I was going to see it. I vowed to see the Taj Mahal in person, though I had absolutely no clue how I was going to make that happen. Back in 1997, my life was a mess, and in the coming years it would become even messier. At times, I didn’t know how I’d even get myself to work, much less to the other side of the planet. I’d only been out of the country once, and that was a 2 hour trip to a mini-mall in Vancouver, B.C. when I was 10 (hey, that counts!) Anyway, I had no authority to make such a promise to myself. By that time in my life, I’d made plenty of promises to myself and others, and I’d broken pretty much every one of them. Somehow, though, this was different. Time went on and I went through my trials and tribulations as I matured. The thought of the Taj Mahal always rested in the back of my mind, and I drew comfort from knowing it was always there, waiting for me.

Eventually, David, the irresponsible young man, matured, and I was able to stabilize my life. In 2006, my career gave me the opportunity for international travel. I hoped that I would someday be sent to India for work, but that wasn’t panning out. It wasn’t until a very good friend of mine proposed a very compelling idea that my dream to see my beloved Taj Mahal truly began to take shape.