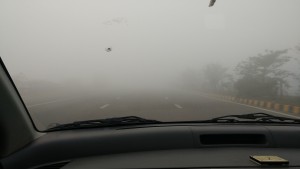 So, here’s the scene. I landed in New Delhi at 11:00pm, and I arrived at and was checked into my hotel room by around 12:30am. I was starving and keyed up from the road, so I got something to eat and didn’t wind up going to bed until about 2:00am. I had to be up at 5:30am (at the latest) to be in the lobby by 6:00am for the 3 hour drive into Agra, Uttar Pradesh, the city where the Taj resides. If you’ve been doing the math, then you’ve realized I’m operating on 2 1/2 hours sleep for the trip, but I figured I could catch up on sleep during the long drive, which I did once I made a few adjustments (like, adjusting to driving 60 miles per hour through fog like you see above).

Being from Sacramento, a river city, I grew up with fog. Sometimes thick, sometimes thin, but it was always temporary. This was a different beast altogether. Mile after terrifying mile, this pea soup never diluted. Driving this far, this fast, in fog this thick, started to play tricks on my mind. I began to see things that weren’t really there: trees, elephants, kangaroos, sperm whales, my 6th grade teacher, anything and everything. It was like a virtual reality Rorschach test. I wound up falling asleep only as a means to escape the terror of the drive.

Suddenly, my driver pulled over (on the left-hand shoulder no less) and slowed to a stop on the side of the road, and there I sat while he took a “pee break.” 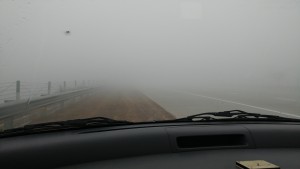 I’ve lived in a foggy city long enough to know that no good ever comes from situations like this!

God is funny. The day before this wild adventure, I came up with a great idea regarding prayer. Rather than praying for a particular outcome, the idea is to pray to be at peace with ANY outcome. Cute, huh? Not one day later and I was put in a position to pray for a VERY specific outcome: PLEASE don’t let me get rear ended and killed in a fiery crash on this foggy-ass road! Another spiritual theory blown out of the water!

Well, this particular prayer was answered, as my driver finished up his business and got us safely back on the road of terror. Whew!

I must say, the drive down was not ALL bad. My driver and I talked and joked the whole time. We estimated the visibility to be around 100 meters. He told me I was lucky I wasn’t visiting in December because the visibility then drops down to 10 meters. That’s enough to cause even veteran drivers to sharply decrease the speed and sharply increase the prayers. Along the way, we also hit what I like to call the Black Trifecta.

It’s always special to see another black person during my travels because it’s so dang rare. It’s especially rare considering some of the places I’ve been, like Brunei, Indonesia, and Japan. When two black people see each other, it’s like we hit the lottery. Well, about an hour into the drive, My driver and I stopped at a rest area. 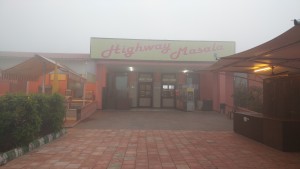 I walked in and BOOM—I saw another black guy sitting there having a snack! Our eyes met and locked for a moment. I think we were so stunned to see each other that we just looked puzzled at the discovery. I imagine this is what it’s like when two sasquatch meet, neither one actually believing what they’re seeing. I took care of business and walked outside and BOOM—a black woman was standing there, and she was not with the black guy at all! I hit the most rare of travel experiences: the Black Trifecta!! Three black folks, unrelated to each other, find themselves in close proximity in an unlikely place. When she and I saw each other, we fell out laughing because we had both seen the brotha inside and we were tripping out at the coincidence. I told her I felt like we should be holding a meeting of some kind. Anyway, her name is Sheryl and she’s a very nice woman from Canada. 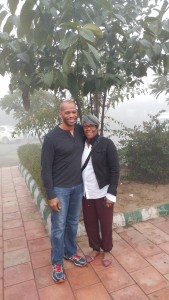 I also met a very nice couple from Oregon who were seasoned travelers with lots of stories. We were all on our way to see our beloved Taj Mahal. Of course, their love paled in comparison to mine, but the more, the merrier. (Jealous much, Dave?)

Now, back on the road with the blessing of the Black Trifecta to protect us!

When my driver announced that we were 30 minutes outside of Agra, we were still encased in a thick layer of fog. I joked that I wouldn’t know I was at the Taj Mahal until I was touching it. We laughed, and 5 minutes later the sun broke through. The sky was clear as a bell as we entered Agra city limits. 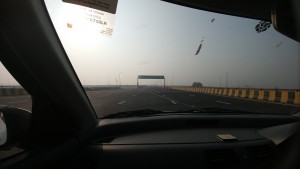 Soon, I would meet my guide, Jagu, who would take me to the end of my 20-year long journey to keep a promise.

2 thoughts on “The Road to Agra”